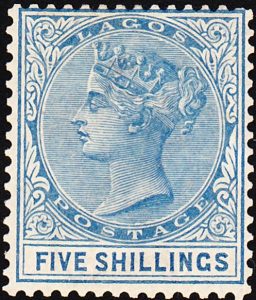 I collect Nigerian stamps and Ireland stamps. Both are countries where I spent significant time in my childhood and where I started collecting the stamps of the period I was there. This lovely QV Lagos stamp was not one of them! I’m not that old.

Now, I’m not an expert on Nigerian stamps, more of an enthusiast who’s learning all the time. For a true expert go to here where you’ll get more expert detail of this amazing country’s stamps than I’ll ever be able to deliver.

Recently I’ve been looking at the stock books and albums in my bookshelf, most of which I’ve ignored for many years. There’s loads of interest in them so I’m due to look again at my Nigerian stamps collection.

The history of Nigeria is closely bound to the history of the British Empire. The British GPO set up post offices in various parts of the south coast, gradually moving into the interior and forming different “countries” until Nigeria itself was formed in 1914.

To look at the stamps of this area which became Nigeria we have a number of natural divisions. Britain gradually imposed its control over larger parts of the country which culminated in the whole state of Nigeria. The dates are a bit variable as the legal aspects of the territories changed.

Nigerian stamps have a load of interest for the collector. With all the territories listed above, there is a complex history of stamp issues as the post offices grappled with the political and financial changes the territories went through.

Nigeria has also resisted the temptation which many other countries have not. This is the tendency to have very large numbers of stamp issues and for subjects to be rather random. Nigerian stamps have been issued at low rates per year and the subjects have all been related to the realities of Nigeria as a nation.

With the difficulties of getting hold of many Nigerian stamps the supply is more limited than many states. Add to this the possibility that its exploding population will do more stamp collecting and the variety and rarity of some of its stamps. This makes Nigeria fertile ground for an enthusiast to work in.