I don’t usually stray from mint stamps, minisheets and perhaps used stamps. But that’s what we collectors do, we stray. I haven’t given in to first day covers (FDC) yet and don’t think I will, but these three covers I have just bought very inexpensively have some interest so they’ll have to fit into my post-independence Nigeria stamp collection.

First there is something to be discussed about the Lander Brothers Anchorage. Richard Lander went on several expeditions to Africa, the last of which ended with his death from gangrene after receiving a musket ball in the thigh. The brothers are credited with opening up the Niger delta to recognition and trade and a replica of their anchorage was built, I think, at Asaba, although the original may have been at Aboh.

So the stamps issued initially in 2010 as part of a definitive set included the Lander Brothers Anchorage stamps at 50 naira. However, and interestingly, there were at least four different Lander Brothers stamps issued and so it’s an intriguing issue to follow. I have to admit that it confuses me at the moment but I hope that a bit of study, and perhaps any comments, may help.

This first cover has a block of three with the circular hologram so I am taking these as Type 1.

Since the last cover I will show today has a postmark from Ile-Ife and is 2013 and all come from the same source, I think it’s quite likely all came from that part of Yoruba-speaking south-western Nigeria.

Here is the second cover, with three stamps separately affixed to the envelope. These have the square hologram so may be Type 2 as they show the anchor and support on the pedestal but without the base plinth. 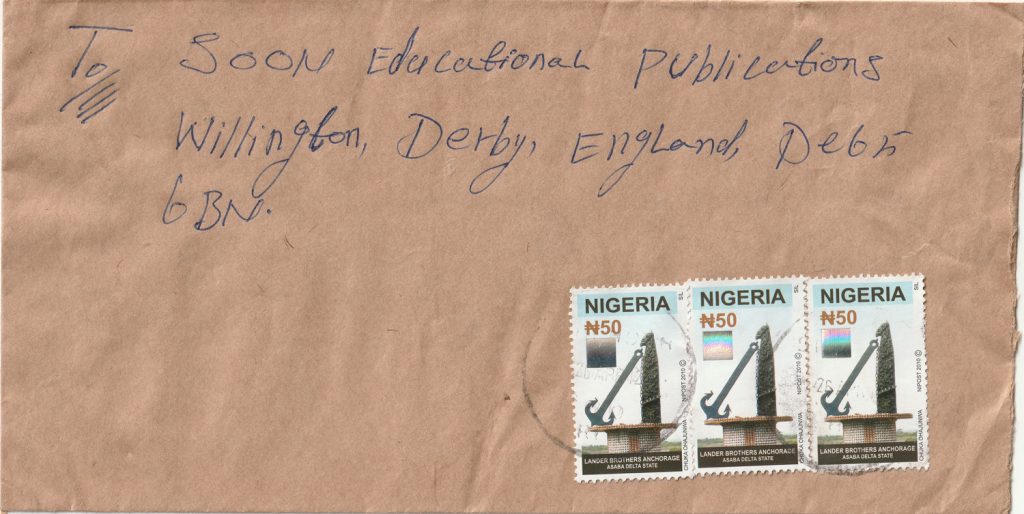 Well, that’s the Lander Brothers for the moment. The third cover is of some interest to me because it is addressed to the same recipient as the the two above, but uses Stamp Duty stamps to make up the 150 naira required. The postmark appears to be Ile-Ife and the date is 15th February 2013, with a word printed lower down which seems to be BOROI but I haven’t been able to figure out what that might mean yet, or if the word is really Boroi or not. But an interesting cover nonetheless, as these stamps were not intended for normal postal use.

The SG catalogue tells me these stamps were initially issued in 2006 for affixing to legal documents but were sold at post offices despite not being intended for postal use. It was reissued at some point with a frame depth of 19mm rather than 20.5mm and these stamps are the later 19mm examples.

That’s the lot for the mo! Let me know if you have any thoughts and meanwhile, happy hunting.