Biafra stamps are an interesting sideline for anyone keen on collecting Nigerian stamps.

The history of Biafra is still disputed. The Federation of Nigeria consists of a nation with three major groups – the Hausa/Fulani Moslem north, the Christian Igbo south-east and Yoruba south-west.

There are a large number of other ethnic groups but the tension between the major groups led to the secession of Biafra on the 30th May 1967.

Biafran post offices continued to use Nigerian stamps until the first issues of Biafra stamps 5th February 1968. Then there was a series of the Nigerian animal definitives of 1965-1966 which were overprinted, followed by a few more issues. A number of later issues seem to have been produced for purely philatelic reasons to raise money and were not used postally. Below I will cover each group in turn. 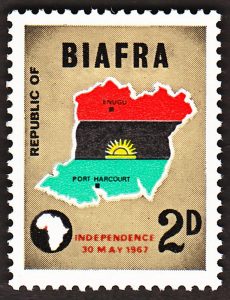 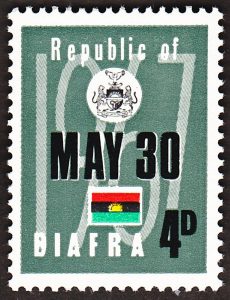 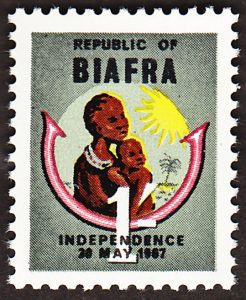 This issue celebrated the declaration of independence of Biafra on the 30th May 1967. The designs are somewhat clumsy and crude. The newly struggling country likely had little time or resources to devote to perfecting stamp design or production.

And they may have been cut off from the Nigerian designers who had begun to define a particular look for Nigerian stamps. If it worked, allowed postal use and brought in money, it was likely acceptable.

These commemoratives of 1968 were produced by the Lisbon Mint, in Portugal. They used lithography and a relatively poor quality paper without any watermark. The chalky surfaces of the stamps are easily damaged. The gum is shiny and yellowish and apparently dextrin, with the perforations at 12.5. After 1968 the printer changed, perhaps because of quality.

The next issue repeated what many new states/nations/rebellions have done. Take the stamps of the “enemy”, in this case Nigeria, and overprint them with the new state’s logo. The clearest case to me, being part Irish, are the “Irish Free State” 1922 overprints on British stamps.

The overprint series is interesting because there are a ton of misprints, parts left out, printings doubled by mistake etc. It made sense to take the stock that they had, in this case stamps of Nigeria, and repurpose them for their own political ends, in this case the “Republic of Biafra”. Much cheaper than making your own stamp issues. The overprints were done by the Government Printer at Enugu, capital of the newly seceded state of Biafra.

The overprints consist of the state’s emblem as at the top right of this page with “PEACE UNITY FREEDOM”, the words “Sovereign Biafra” and two cancelling bars across “Nigeria”. However, this does vary a lot on the different stamps. Some have red, some have black. 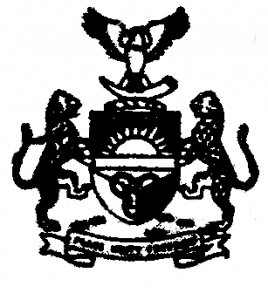 I took this overprint from one of the stamps and have only tidied it up a little bit. You can see it’s the same as the emblem at the top of this page, but is very crudely printed on most stamps. The words PEACE and UNITY are often just readable but FREEDOM seldom is. 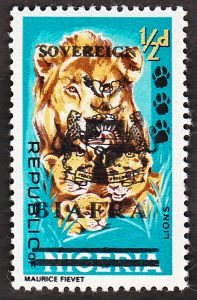 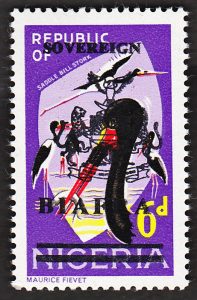 The 1/2d and 6d Biafra stamps are vertical and the overprints are in the same places.

The “SOVEREIGN” is put at the top, the national emblem in the centre and the “BIAFRA” in the lower third.

Two black bars cancel the “NIGERIA” of the original stamps at the bottom.

The next two stamps are horizontal,  the 1d and the 1.5d. They both have the “SOVEREIGN BIAFRA” on the lower left side, the emblem on the right and the black bars cancelling “NIGERIA” upper left. 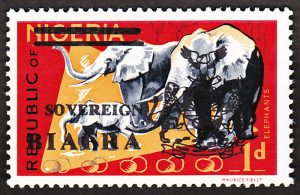 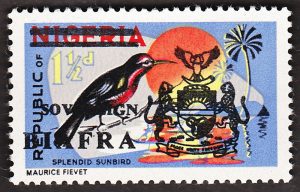 I don’t have an example of the 2d Village Weavers and the 4d Leopards, I’ll add them when I do. The 3d Cheetah stamp did not appear in this issue. 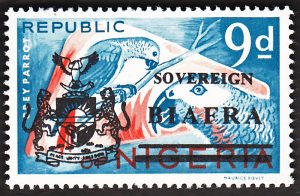 The 9d stamp has the emblem on the left and the “SOVEREIGN BIAFRA” and cancelling bars on the right.

The next four stamps are the 1/3d, the 2/6, the 5 shilling and £1. They all have the emblem printed in red centrally and SOVEREIGN BIAFRA printed more or less over the emblem. From the top of SOVEREIGN to the bottom of BIAFRA is 1cm and the width of the word BIAFRA is 2.1cm as against 1.6cm on the smaller stamps. 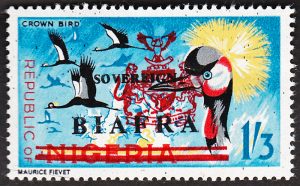 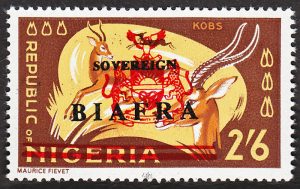 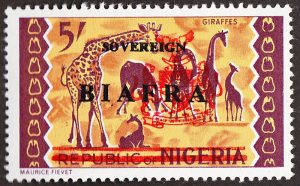 The last one to cover, at least in my collection, is the 10 shilling. Here the SOVEREIGN has been left out. The emblem is black and central with the word BIAFRA above it across the hippo. 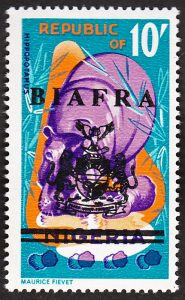 Apart from these there are a number of varieties, or errors, in this issue. The overprints can be doubled or omitted, either the wording or the emblem may be omitted.

As with most Biafra stamps, they are worth more used than mint. Many Biafra stamps were issued for financial reasons, particularly the mini-sheets, and so don’t really seem to be valid postal issues. So properly used examples (not ones with the UMUAHIA postmark which is cto, or cancel to order) are more valuable, particularly on cover.

A number of issues were issued with overprints such as “HELP BIAFRAN CHILDREN” and “BIAFRA – FRANCE FRIENDSHIP 1969 SOVEREIGN BIAFRA” with various surcharges applied to the stamps. There’s no evidence to show that these issues were used postally, so they may have been political or financial in motive. I’m going to keep them separate from this review of the standard postal issues.